Modern organic farming techniques were introduced by British botanist Sir Albert Howard. He has given a detailed outline of his view of organic farming in his book “An Agricultural Testament”. Environmentalists were the first to embraced organic farming because of the effects of synthetic fertilizers on the surroundings. Other people have supported the idea largely because of their fear of consuming unsafe food.

Consumption of organic foods is on the rise. This increase is a direct result of people being aware of the safety of food they consume. It is important to make sure the food being sold to the people is genuinely organic. This is achievable by exercising stringent cultivation standards. In America, the USDA introduced a certification process in 2002 for enforcing adherence to the standards.

The problem of global warming could be eliminated if farmers switched to organic farming completely. Organic farming can help reduce the levels of carbon dioxide released into the atmosphere. This may not be possible since some of the farmers are still stuck to conventional methods of agriculture.

The cost of these organic foods is also high to the final consumer. Prices of organically produced foods exceed mainstream alternatives by up to 40 percent. Proponents of organic farming methods argue that people can find ways of buying the food at affordable prices. One can join Community Supported Agriculture organizations or shop from farmers markets. Consumers can also take advantage of sales and coupons.

In a move aimed at lowering consumer prices, large players in the organic food market seek products from other places. The materials may not be produced organically meaning the product will not meet expectations. These firms are no in breach of any USDA rules as that area is not regulated.

Organic farming has many benefits especially to the environment. However, many people who would like to embrace it have no idea how to go about it. The health of people has been affected by consuming foods laced with chemicals used in food production. All these problems are avoidable if more people know of the basics of organic farming. Even if it is not possible to completely switch to organic farming, it will be helpful if more farmers would practice it. 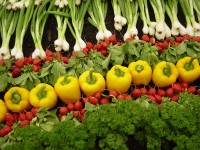 The use of organic farming reduces the exposure of crops from pesticides and it increases the quality of the nutrients. Consumption of organic foods therefore keeps one healthy since it does not contribute to the production of toxins that are produced when chemical agriculture is employed. Pesticide poisoning is very dangerous as it increases chances of having particular cancers and may severely affect child development this is so because a child has body organs which are yet to be fully developed and can not therefore fully detoxify chemicals that are toxic to their body. Organic foods other than being free from chemicals they also do not contain artificial flavors and even preservatives that do increase a consumer’s expenditure.

The use of chemicals in farming is absent in organic agriculture and therefore making organic agriculture or farming more beneficial to the soil as it reduces soil pollution that may have been caused by the toxic chemicals. The top soil is therefore not destroyed and it stays healthy producing crops and vegetables rich in micro-nutrients. The soil therefore becomes rich in micro nutrients and can be used over along period of time in growing crops. The uses of organic farming method like no-till organic involves cover cropping which not only increases nutrients but also prevents weeds as it involves mulching.

Soil natural filters water and the use of chemicals in farming affects the ground water by polluting it. Organic agriculture on the other hand by being free from chemical usage prevents such pollution and also where the soil as been polluted, organic farming helps to correct such pollution.

The use of fossil fuels in the conventional farming has contributed to the climatic pollution. Such fossil fuels can be contained in the pesticides or fertilizers that are manufactured and can be directly applied in to the soil. The soil will therefore risk degradation consequently causing it to release carbon and also its capacity to hold water and fertility are greatly affected. The use of organic farming techniques has the effect of reducing climatic pollution since it reduces the use of fossil fuels. It then follows that there will be a decline in the impact on global warming thus making this form of agriculture to be pro-environment.

Better or sweet taste of food

It has also been found that that organic foods taste much better than the foods drawn from farms that conventional farming was applied. There are low nitrate contents in organic foods making things like fruits to taster sweeter while also having high amount of antioxidants.

Organic farming when used reduces one’s expenditures in farming. It reduces production cost by eliminating the use and purchase of fertilizers and pesticides. By reducing soil erosion it also increases crop yield.